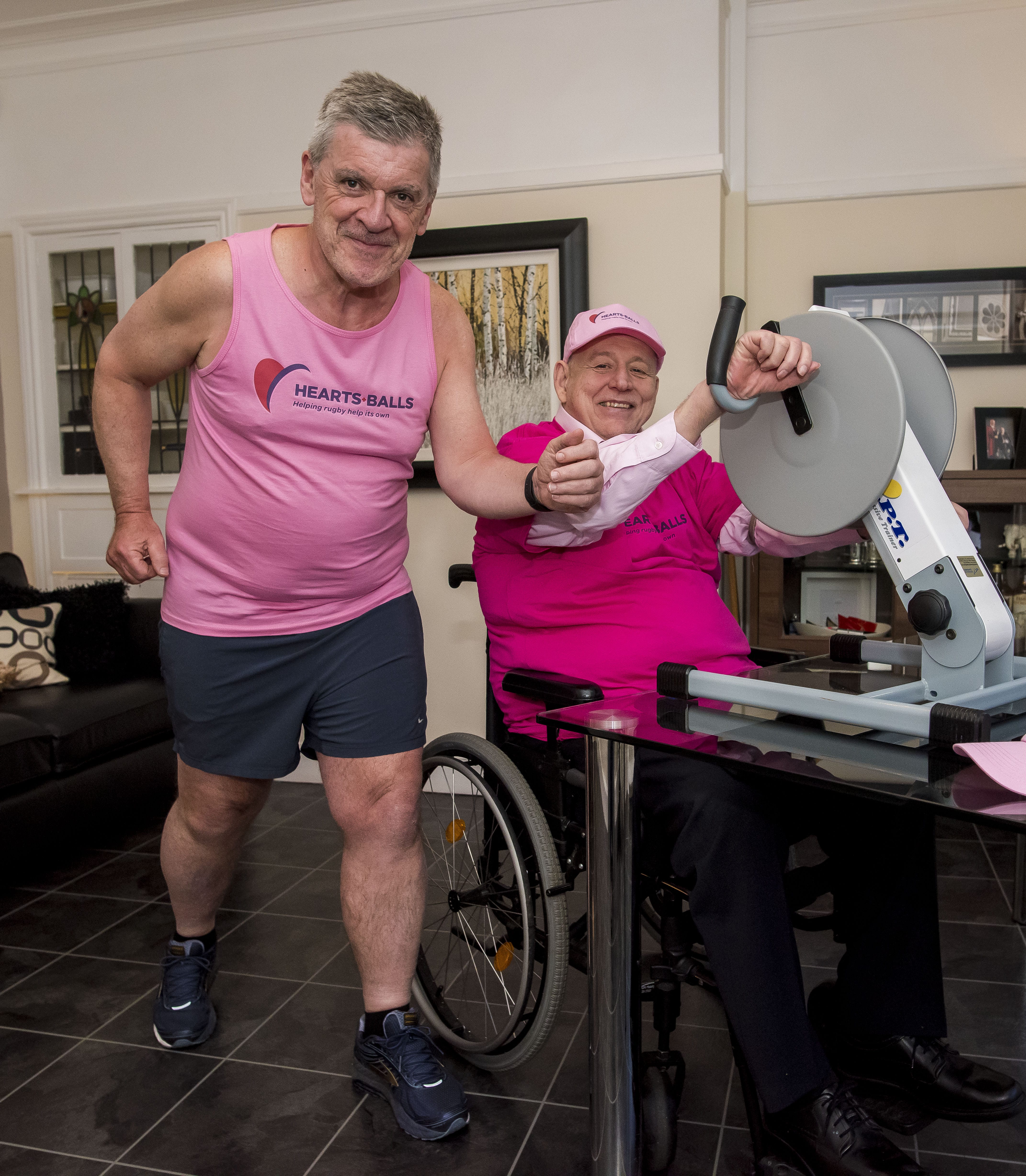 Despite being paralysed from the chest down, Jim Taylor is taking on a marathon challenge to spur on his friend ahead of his own 26.2-mile charity odyssey.

While Gordon Hollerin is preparing to run the London marathon, 63-year-old Jim is getting set to match him mile for mile on an arm exerciser.

On April 28th, from his home in Bearsden as he watches Gordon race on TV, Jim will vigorously cycle his arms for 26 miles to try to beat Gordon’s time on the road.

Both competitors will take on their respective challenges for Hearts + Balls, a charity which supports rugby players and their families in times of need.

It’s been five years since Gordon’s last marathon – but the extra push from his friend is providing all the encouragement he needs during a gruelling 17-week training process, and on race day itself.

The 61-year-old from Newton Mearns, who is GHK rugby club’s secretary, said: “Jim’s the most inspiring person I know, so my main focus will be to make sure I don’t let him down. I certainly faced my own fair share of injuries during my more than 30 years of playing rugby, but I’m incredibly lucky to be in a position that I’m able to run a marathon, even if I’m unlikely to break any records!

“Hearts+Balls is a wonderful charity which supports those who aren’t so lucky. While very few suffer life changing injuries, it’s testament to the rugby community that when someone does, everyone pulls together. The London marathon is definitely one for my bucket list and it will make it all the more unforgettable an experience that I will raise money for a charity very close to my heart as I run.”

Gordon, an insolvency lawyer for Scottish law firm Harper Macleod, is currently training five times a week, with his mileage already up at 16 miles, while Jim, a Hearts + Balls ambassador, is also putting in the hard yards on the road roller which he received from the charity to help him be more active.

At age 23 Jim’s rugby playing career was tragically cut short after an injury he suffered while playing for Kelvinside Academicals left him paralysed.

The Glasgow Warriors partnerships manager said: “The charity has supported my family and I in so many ways over the years, and the recent donation of a road roller has been life changing. I’m really enjoying the training and building my fitness back up – it certainly helps to have a goal in mind. Think my training is way behind Gordon’s though!!

“My wife thinks I’m daft but I’ll never back down from a challenge! Although he’s my rival for now, I’m incredibly grateful to Gordon, and all those who make the effort to fundraise for a charity which has given me so much. Any donations will make a huge difference to members of the rugby community during their times of need.”

To donate to Jim and Gordon’s charity competition, visit http://uk.virginmoneygiving.com/GordonHollerin1