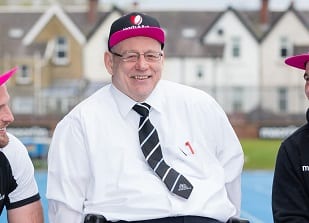 “I broke my neck at c5/c6 level in 1978 in a rugby scrummage collapse when playing against Old Aloysians whilst playing for my former pupils rugby team Kelvinside Academicals.

I was playing hooker that day – jack of all trades, indeed most sports including squash, tennis, football, ski-ing, but master of none – to allow a friend to attend a wedding in an early season friendly match. Loose head prop was my preferred position but I was happy to pit my ‘skills’ against the then Glasgow hooker Phil Crampsey in the amateur era.
10 minutes or so into the game I was already being taught a lesson before the accident happened.

My complete neck break rendered me a tetraplegic and confined to a wheelchair for life from age 23.

Doctors in the opposition team – Dr. Roddy MacLeod and Dr. Paul Rodgers saved my life by insisting I wasn’t moved. I was covered in blankets to be kept warm, struggling to breathe. I had watched the rugby ball move out to the opposition backs but could not get up – no pain, but felt like my legs were ‘floating’! I was comforted by non-playing injured friends Charles Berry and Jack Smart who accompanied me in the ambulance to the ICU at the Royal Infirmary.

I still recall the banter as they kept me going and thankfully I did not pass out – I thought the grass and mud in my face were the problem regarding my breathing which obviously wasn’t the case! The ambulance had to be escorted onto the pitch after the rusted/fused gates at Millerston had been broken open and my journey with my comrades started with a clip stretcher being placed underneath me before transfer to the ambulance to start my new journey in life.

I had ‘Heath Robinson’ head callipers drilled into my head with weights hanging over the back of the bed to stretch the spinal vertebrae. Nurses were great during this traumatic time in which it slowly began to sink in that it was a bit more serious than I had originally imagined.

I was transferred to the then Spinal Unit in the West of Scotland based at Philipshill hospital in East Kilbride. I recall umpteen people on either side lifting me onto the transfer trolley on vacation of ITU in the Royal to a more specified hospital to recover – I had made it through the first 7 days!!! Little do you realise the turmoil to parents, family and friends in the outside world.

The ambulance journey was surreal and I felt, for the first time, real pain in my neck – on transfer at destination from trolley to bed, with again a huge team lifting you on both sides and keeping you straight, I felt a huge pain/spring like effect in my neck – apparently my language was ‘blue’. Staff quickly organised telephone directories under my re-dislocated neck and eventually it was made stable with no other major impairment or damage done.

I lay for 6 weeks on my back, being turned every two hours by pelvic hip swivel to ensure no pressure sores and had to rely on folk feeding me as the remedial gymnasts – now Occupational Therapists had made plaster casts to keep my fingers straight and I am to this day indebted to them as I can use a pen to key on a laptop, write, feed myself, do my teeth – the list goes on but it took hours of hard work to achieve ‘the best you can be’.

It was during this 6 week window I realised, despite being pinned down with only a ceiling to look at, amidst the shadows of wheelchairs that I wanted to walk out. The daily checks on my leg feeling had not produced positives and after 6 weeks Dr Seymour advised I would not walk again – for some reason something kicked in – I wasn’t phased – fought the tranquilisers given to me – I knew I was going to win – either the stubborn fool or competitive sportsman inbuilt in me or my positive mental attitude.

I threw everything into my gym work once I had gradually been given a pillow, collar to hold my neck stable after my head calipers were removed and eventually after another 6 weeks into a sitting position. The laughs – and you need them, as bets were placed on me passing out as I was assisted into my wheelchair for the first time. A lot of the incentives and carrots would not be perceived as politically correct in today’s modern world but I was driven and encouraged to succeed as my desire was so strong. I am indebted to Norman who gave me the extra workload that I demanded and he saw something in me that inspired him to assist me to deliver my maximum potential and turn out a decent human being who, despite disability, wanted to strive to return to paid working employment and have a ‘normal’ life albeit with necessary support.

A year or rehab ensued in hospital before ‘release’ home to the outside world and life with my Mum, Dad and David my fifteen month younger brother.

My next challenge was adapting to home life and working to a routine – Mum was my nurse and carer. Whilst in hospital for the protracted time the existing family home had been converted to give wheelchair access and indeed a downstairs bathroom suitable for use. Norman Bennie who played in the team was an architect and he and indeed the whole club rallied to the call for support.

A year later I returned to my employment with the Bank of Scotland on a part-time basis and through excellent, understanding employers, eventually became customer facing and dealt with all aspects of Banking to meeting customer requirements – I hold a strong work ethic and to me customer service is paramount as I’d discovered this through my hospital residency. If you say you will do it you do it!

Much to people’s alarm I started driving and was delighted my Dad’s automatic Fiat could be fitted with hand controls and he spent hours with me driving in car parks to ensure I was capable and competent – my car, despite requiring assistance to load/unload wheelchair and transfer board to access and egress has given me huge independence and with the advent of mobile phones – I am slow but can operate – new horizons have opened up.

I met my wife of now 22 years – Sandra – in the hair dressers and from early friendship we are now a truly formidable team – Sandra my wife, carer, best friend and indeed ‘angel without wings’ who has and still does support me in whatever direction I choose to pursue whilst holding down her own business.

I’ve achieved a wonderful, fulfilling life with marriage, work in the Bank of Scotland until aged 50, followed by employment with Glasgow Warriors as a Partnership Account Manager – back to my roots, as I never held a grudge against the sport nor opposition as it was an accident. I look after sponsors and partners who willingly accept me as a person as do the players and staff who give me huge support, as have my friends and family over the year and I am thankful that my outgoing personality makes it easy for folk to ’buy in’.

Over the years I have always had a desire to give back to those that have supported me in my times of need and indeed attend Queen Margaret University to give a ‘chat’ to Occupational Students to assist those they will assist in the future with spinal injury practical life tips.

I’ve raised thousands of pounds for a variety of charities – Alzheimer’s as my mother died of the dreadful disease, cancer as my father passed away from this, sporting charities – I am an Ambassador for The Hearts Ballsand Balls Charitable Trust and have been for some 10 years – ‘Helping Rugby Help its own’. This is to support seriously injured rugby players and ‘inspire’ them to follow me into the work place via University or learning, subsequent employment and enjoy a lifestyle they desire. I’ve committed many hours to hospital visits and hope I have assisted. Hearts + Balls assisted SIS with Glasgow Warriors to financially assist Clober garden and indeed man power to clear the site.

I love arranging charity fundraisers from my ‘Alternative 21st party to celebrate 21 years in a wheelchair’, ‘silver party to mark 25 years’ ‘Ton of granite challenge – pushing a ton in weight of curling stones for a mile on ice’ to name a few.

I’ve enjoyed curling which I was introduced to whilst President of the Kelvinside Academical Club and am currently President of the Curling section. I have also had tremendous enjoyment from wheelchair curling winning the Scottish Championships in 2006 and 2008 as well as the British in 2008 and the National pairs. I think my team mates did the majority of skill work to achieve success! Helping pioneer wheelchair curling to integrate with able bodied curling teams has been very satisfying.

I was diagnosed with breast cancer in December 2014 and after undergoing a mastectomy in January, 2015 and thereafter 4 blasts of chemotherapy every 3 weeks and indeed 15 sessions of radiotherapy I am delighted to advise that I was recently given the all clear with an annual review in January, 2016. I was fortunate to again receive wonderful medical support and advice as well as support from my huge network of friends. I managed to work through my various treatments – some from home and some in the office.

I was truly honoured to be nominated for an MBE and received my formal letter in May this year before being released to the public in the Queen’s birthday honours list in June. Investiture will be in October which is very humbling and still surreal in reality.

Now I am able to enjoy life and be the social animal that I am again! I have much to celebrate – my MBE, 60th birthday, winning against breast cancer and celebrating the small part that I played in contributing to Glasgow Warriors winning the Guinness PRO12 championship in season 2014-15 – the first club in Scottish rugby history to achieve this – very proud

Just Jim is what I consider myself and the MBE award I consider as much for Sandra as for myself.

I love living my life to the core values established at Glasgow Warriors and think they epitomise me:-
‘Trust’ , ‘Respect’ , ‘Honesty’, ‘Whatever it Takes’ and indeed my own ’Desire to Aspire.’
I have loved my life and lived it to the fullest with no regrets.”