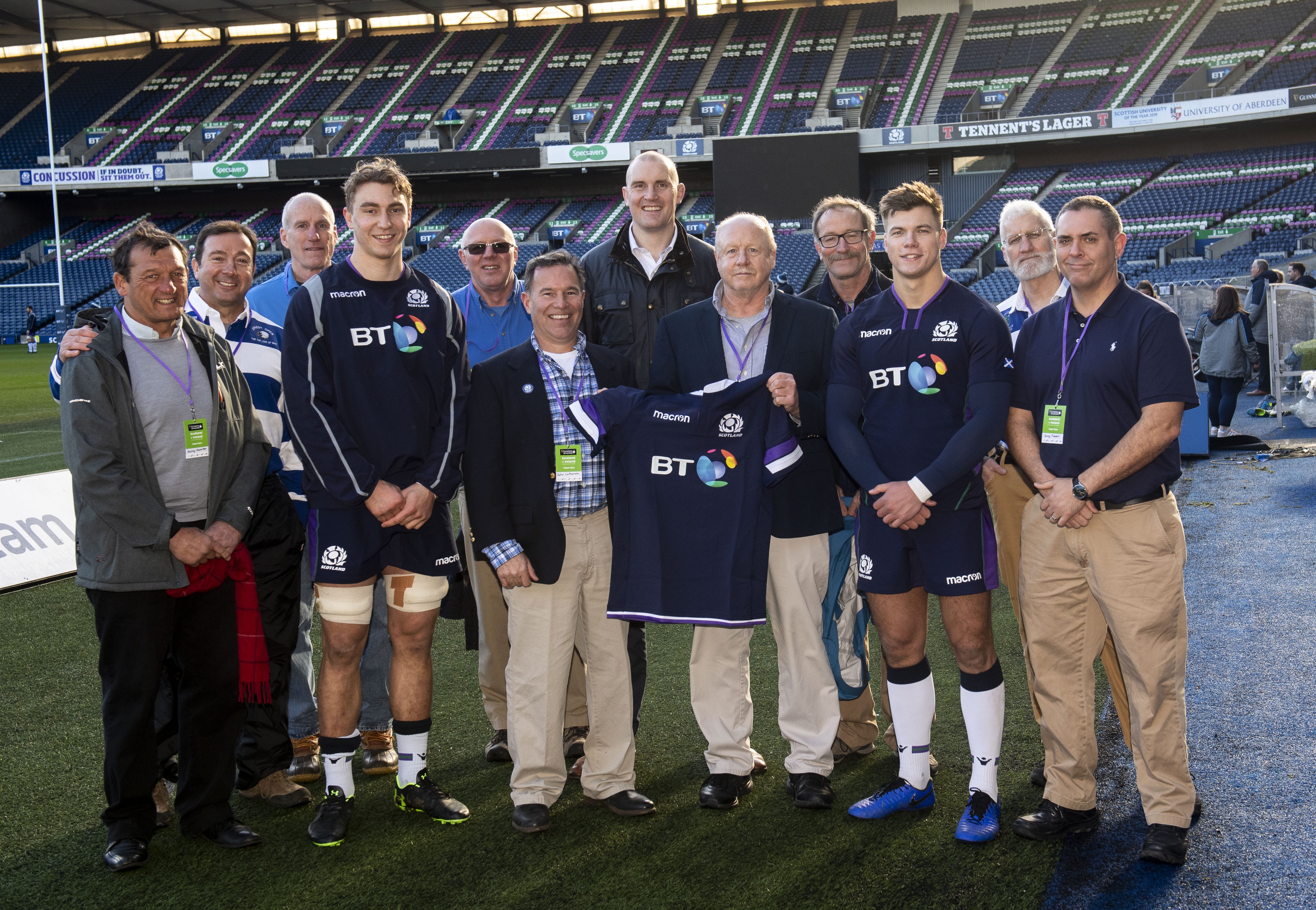 Members of an American rugby club have made a trip of more than 3,000 miles to Edinburgh deliver a cheque for more than £3,000 to a Scottish charity.

In 2010, Mike Jones broke his neck while playing at the Fort Lauderdale Ruggerfest in Florida. The injury left him paralysed from the neck down.

Hearts and Balls, a Scottish rugby charity which helps the rugby community help its own, immediately stepped in with a donation of £1000 to support Mike and his family during an incredibly difficult time.

As a result, members of the Albany Knickerbockers and their supporters decided they wanted to give back to the charity which helped Mike during his time of need.

Now, after exceeding an initial fundraising target of $2,500 by more than $1,000, a delegation from Mike’s support team, affectionately known as “Jonesy’s Front Row”, embarked on a mission to Murrayfield to hand-deliver the cheque to Hearts + Balls.

On the eve of Scotland’s Six Nations match against Ireland, the group took in Scotland’s team run at one of the most famous stadiums in world rugby, BT Murrayfield.

On behalf of Jonesy’s Front Row, Dave Farison said: “The contribution from Hearts + Balls was vital during a critical time for Mike and it enabled him to transition from Florida to New Jersey to be with his family.

“The generous donation, which was given with nothing but love and support, was all the more incredible as it was from a charity based on the other side of the world. It shows the incredible reach and generosity of the rugby community.

“It’s a true honour to make this trip. I only wish Mike could have joined us. “

The donation will help rugby players and their families in times of need. The charity provides support in the form of property conversions, equipment, travel costs, respite care, legal costs and counselling.

Hearts + Balls board member, and former Scotland captain, Al Kellock, was on hand to accept the cheque on behalf of the charity.

He said: “While our charity was set-up with a mission to help Scottish rugby players who need our support, sometimes, there are cases which simply can’t be ignored.

“The fact that Mike’s friends have pulled together to do their bit and give back so we can help even more people is yet another example of the incredible community involved in the game that we all love.

“I was honoured to welcome them to BT Murrayfield and thank them for their incredible contribution. All our thoughts are with Mike. Hopefully, one day, we’ll have the opportunity to show him that Scottish hospitality is second to none!”